Onboard Administrator monitors up to 10 fans in the enclosure and adjusts fan speeds as necessary, based on thermal and power measurements. The speed of individual fans can be adjusted to reduce noise and power consumption, and to compensate for airflow differences within the enclosure. The performance of each fan is monitored, and Onboard Administrator reports any failures or warnings to the system log and HP SIM (when SNMP is enabled).

Monitoring fan zones is only available on the c7000 Enclosure. All other thermal subsystem features and functions are the same for c3000 and c7000 Enclosures, except where noted.

The following screen shows the Fan Summary page for a c7000 Enclosure. 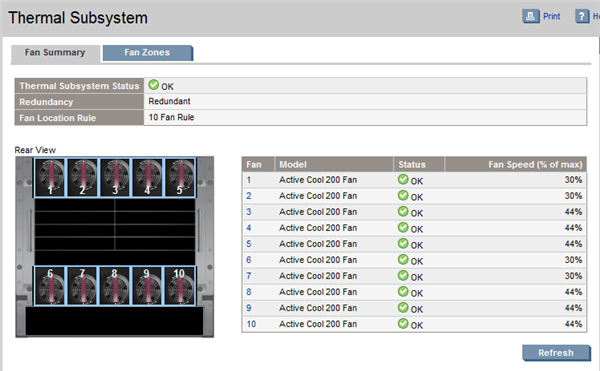 This screen provides status on the thermal subsystem and each individual fan.

The following screen shows the Fan Summary page for the c3000 Enclosure. 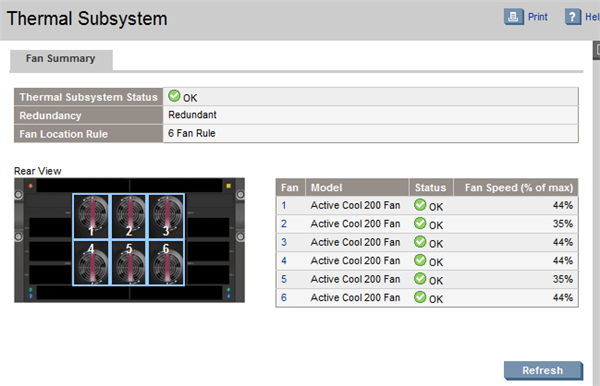 You can view the status of each fan by selecting from either tree navigation or graphical navigation. The Fan Information screen provides information about the overall status, the name, the amount of power consumed in watts, the part number, the spare part number, and the serial number. The Fan Information screen also includes diagnostic information such as internal data errors, location errors, device failures, device degradation, and device mismatch. Fan speeds appear in RPMs. To update information on this page, click the Refresh button. 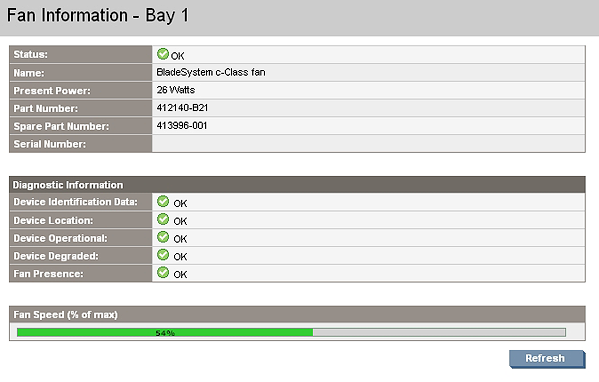 For proper installation of the fans into the enclosure, see the HP BladeSystem c7000 Enclosure Setup and Installation Guide.