The second component of the HP BladeSystem Onboard Administrator GUI navigation system is a graphical representation of the physical enclosure, called the graphical view. The graphical view consists of two subcomponents: a front view and a rear view.

The following image shows the graphical view of a typical c7000 enclosure. 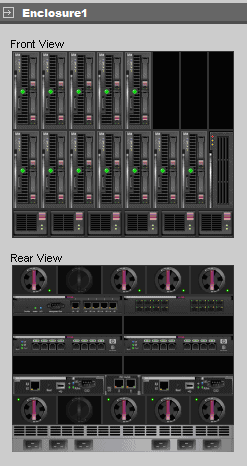 The following image shows the graphical view of a typical c3000 enclosure. 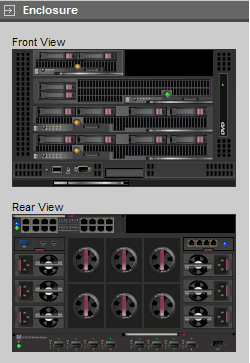 All functions and features for the graphical view navigation are the same for both the c3000 and the c7000 enclosures, except where noted.

The graphical view reports the status of every device in the enclosure. The status of each device is indicated on the device by a small status icon. No status icon appears for a device that is working properly and has an OK status. However, any other status codes appear as status icons on the device.

The graphical view does not report the presence or absence of hard drives in the server blade or storage blade.

Although the front and rear graphical views are both affected by user permissions, security on the graphical view is handled differently from the left tree view. If the user does not have permission to access a device, a blank bay appears regardless of whether a device is present in that bay, and a padlock icon in the bay table cell appears, indicating that the bay is locked to the current user.

To minimize the graphical view from the main display, click the small box that contains an arrow located directly to the left of the name of the enclosure in the Graphical View box. This option minimizes the Graphical View and give more room for the main section of the display. This is useful when viewing the Onboard Administrator on a small monitor or on a monitor using low resolution. 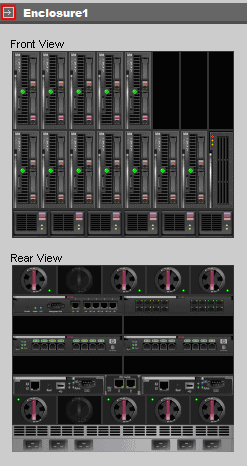